The field paradigm and the idea that everything is part of one larger whole of consciousness may sound counterintuitive for a lot of people, but actually a lot of things start to make a lot more sense once we start looking at things from a new perspective, including:

On September 22, 2010, the BBC News website reported on a discovery at the Large Hadron Collider (LHC) in the European Center for Nuclear Research, or CERN, that some leading physicists feel will someday be regarded as far more important than the discovery of the Higgs boson. At the time, however, it didn’t receive much attention, because it was so strange that nobody knew what to do with it. 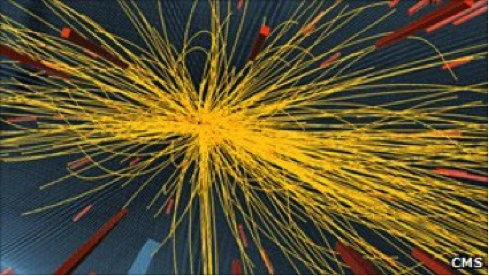 Experiments in the LHC accelerate subatomic particles around a ring to insanely high speeds, close to the speed of light of 300,000 km per second, and then smash them into each other. This releases an enormous amount of energy, enough to breaks up the particles into even smaller particles that fly off in all directions, a bit like the debris that flies off when you crash a car into a wall. By measuring these smaller particles scientists can then see if they find the particles the physics models would predict, like the Higgs boson, which is a particle that gives all the other particles mass.

CERN researchers, however, had noticed that these smaller particles don’t just fly off in random directions, but behaved ‘as if they were talking to each other’, as if the particles say: ‘Okay I’ll fly this way, and you fly that way’. There were patterns in their flight path that could not be explained just by random behaviour.

The data was solid, but the scientists just didn’t know what to do with it, so they were very careful in their announcement, just calling it ‘new and interesting effects’, without any further interpretations.

Actually the CERN scientists were not the first ones to notice this strange behaviour at the subatomic level. Another research lab in the U.S. had already noticed similar results.

When we think of subatomic particles as dead material balls, this just doesn’t make sense. We tend to think that consciousness comes from the functioning of our brains, and obviously these subatomic particles don’t have brains, and yet they are fully aware of what the other particles are doing. But if we change our point of view and start to think of consciousness as a field, and these particles as waves on this field, suddenly it starts to make a lot more sense.

This is where the qualities of omnipresence and omniscience come in. Omnipresence means that the field is everywhere and that through this field every point in creation is connected to every other point. Just think of a radio broadcaster. It will create a vibration in the electromagnetic field at one point, but the radio signal can then be picked up at any other point around it, because every point is connected to every other point.

The classic book The Secret Life of Plants by Peter Tompkins lists many examples of how plants are actually fully conscious of what is going on in their surroundings and  react to this.

For example they found that it’s possible to measure a stress reaction with plants by measuring galvanic skin resistance (GSR), the technology often used on humans with lie detectors. If there is some stress reaction, we start sweating, and then the electrical conductivity between two points on the skin increases (or the skin resistance decreases). Plants show a similar reaction.

So researchers put two plants next to each other and set the leaves of one of the plant on fire, and saw a clear stress reaction with the plant, as expected. What they didn’t expect was that when they measured the GSR of the plant next to it, it showed the same stress reaction. It reacted in just the same way when the leaves of its neighbour were set on fire as when its own leaves were burned. It could “feel” the stress of its neighbour.

The scientists considered that perhaps this was because the second plant registered some danger through heat or smoke or something. So they did another experiment. They had two plants standing next to each other for some time and then the moved one of the plants to the other side of town and set its leaves on fire… and the other plant registered exactly the same stress reaction. One way or other these plants appeared to be communicating ‘telepathically’.

This is very difficult to explain if plants are just material things, but if they form a part of a larger whole, a field of consciousness, it starts to make a lot more sense. The Secret Life of Plants is filled with dozens of experiments like this. It was published in 1973 and was a massive best-seller.

In the animal world there are several beautiful examples of interconnectedness as well, but none more striking than watching a flock of many thousands of little birds called starlings fly together, forming one clearly visible whole, as if they are part of one larger consciousness, as you can see below.

If these were inanimate objects, whose motion is somehow controlled by a central computer, can you imagine the processing power that would be required to perfectly align all these thousands of objects to each other, and make them move together like a unified whole, with none of the objects ever colliding with another object? Do birds have that kind of processing power? Obviously not; their brains are primitive compared to human beings.

The other interesting observation is that researchers measured the visual reaction time of birds and found that the birds reacted far more quickly than they ever could if they would first have to visually observe the flight of the other birds, and then adjust their own flight trajectory. It was as if the birds were communicating telepathically.

So something more is going on, something that scientists were never able to explain, until they started literally seeing these individual birds as part of one big whole, one group consciousness. If birds, like plants, and like everything in nature, are part of a larger whole, it starts to make a lot more sense.

The most fundamental teachings of our religions start to make sense.

While what we will discuss is applicable to all religions we’ll use the example of Christianity here.

The most fundamental teaching of Christianity is essentially a message of unconditional love. God is love, the Bible says. We have already seen that love is just an experience of feeling connected to somebody else, because we are connected to everyone. Usually that connection is hidden in our subconscious minds, but with some people this connection is so strong that we can consciously experience it and we feel love.

With other people we experience it in more subtle ways. For example, why do we want to help people at the other side of the world after a natural disaster, for example by donating some money to a charity? We don’t know these people. We never met them and will never meet them. Yet still we want to help. Why? Because one way or the other we feel connected to them. This is human nature. This is why isolated computers don’t feel love, but humans do.

Saying that “God is love” or saying that there is an omnipresent field that connects everyone (which we experience this as love) is just using different words to say the same thing, but there is one fundamental difference. In the God Paradigm we say God is Love, but we see ourselves as separate from this higher being, in the Field Paradigm we say that Love is actually our true nature. Everybody’s true nature is to be loving, to be purely good. We can forget about our true Nature, by leaving it hidden in our subconscious minds. If people have enough stress covering up their real nature, even the most loving person in the world can become a criminal.

When Christ was talking about unconditional love, he was just talking about a state of consciousness where we feel connected to everybody all the time. People said he was the “son of God” but he said “we’re all brothers and sisters”, meaning “we’re all children of God”.

Religious texts are written in code and are interpreted differently based on the decoding language we use. If we use the Machine Paradigm language, the religious writings will mean one thing, but if we decode the language from the Field paradigm point of view, it will mean something completely different. Basically you’ll find that everything starts to make a lot more sense.

“He who finds himself, finds God” Islam

“Aham Brahmasmi” I am the creator. Hinduism

Have you ever had the experience that you thought about someone you haven’t met in a long time, and suddenly he/she calls or emails you? Or you think about some event and suddenly it happens? You think that it’s a coincidence, but if this happens enough times you start to wonder whether there’s something more.

There is. Our minds are intimately connected to the outer world. There is only one consciousness and we are all a part of it. From that perspective it makes a lot more sense that we can have a thought in our minds which is then reflected by an event in the outside world.

Sometimes we know something that we’re not supposed to know just based on sensory input. We call it intuition, or a gut-feeling. Most successful business leaders are successful because they have learned to trust their intuition, that’s what gives them a competitive advantage.

Intuition doesn’t make sense from a Machine Paradigm point of view. But if we are connected to a field that is omniscient, where everything is known, then could it make sense that sometimes a thought comes up where we do know more, something where we can’t explain why we know it but we just know it.

People who learn to be in touch with this field find that their intuition becomes more and more reliable, and even more, that they spontaneously get the right thought at the right time. It’s as if there is a supercomputer that can calculate every possible outcome of every possible thought and then sends you the best thought you can have at each moment. This is intuition at it’s best and it’s amazing how much more efficient life becomes if you learn to develop this skill (you don’t learn, it happens automatically once you learn to transcend).

Near Death Experiences and Reincarnation

If you want to get a Machine Paradigm believer on his horse, start talking about NDE’s and reincarnation. When the computer breaks down it’s game over, as simple as that, so such experiences are utterly impossible. If you try to show them the hundreds of thousands of records of Near Death Experiences, where the computer did break down but the software (consciousness, the soul) simply continued, and they could come back to talk about it, or the thousands of records of people who have such clear memories of past-life events that the event could be verified and confirmed, you only see them become even more irritated. “Don’t try to prove me what’s impossible. It’s impossible, end of story.”

Most people who had Near Death Experiences are no longer afraid of death, because they’ve experienced that death doesn’t exist. It’s more like the soul changing clothes. At a certain moment the clothes just become a bit old and worn down, and then it’s better to put on some new ones.