Here we’ll explain in more detail why transcending has such profound effects on 3 main areas of life: 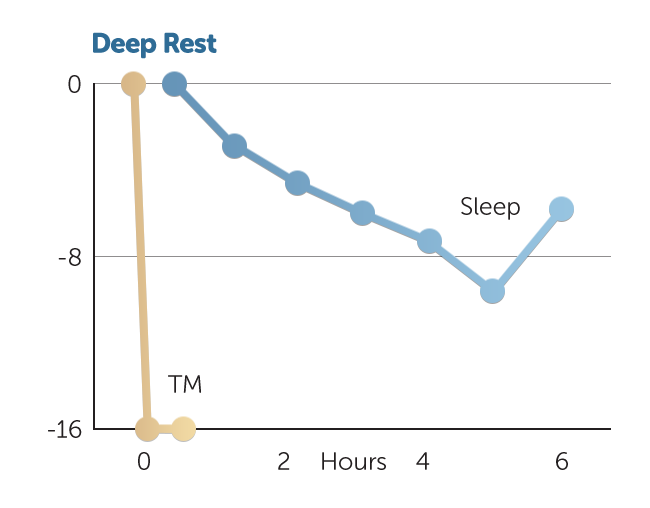 Transcending, as we have seen, is a state where the mind becomes completely silent, resulting into a state of deep physical relaxation as well. When researchers at Harvard Medical School tried to measure just how deep this relaxation was they found, to their surprise, that the rest appeared to go far deeper than even deep sleep. It also went into this state far more quickly, in mere seconds, whereas during sleep it usually takes several hours. More than 30 studies around the world have confirmed the deep state of relaxation during TM.Ref.American Psychologist 42: 879–881, 1987. 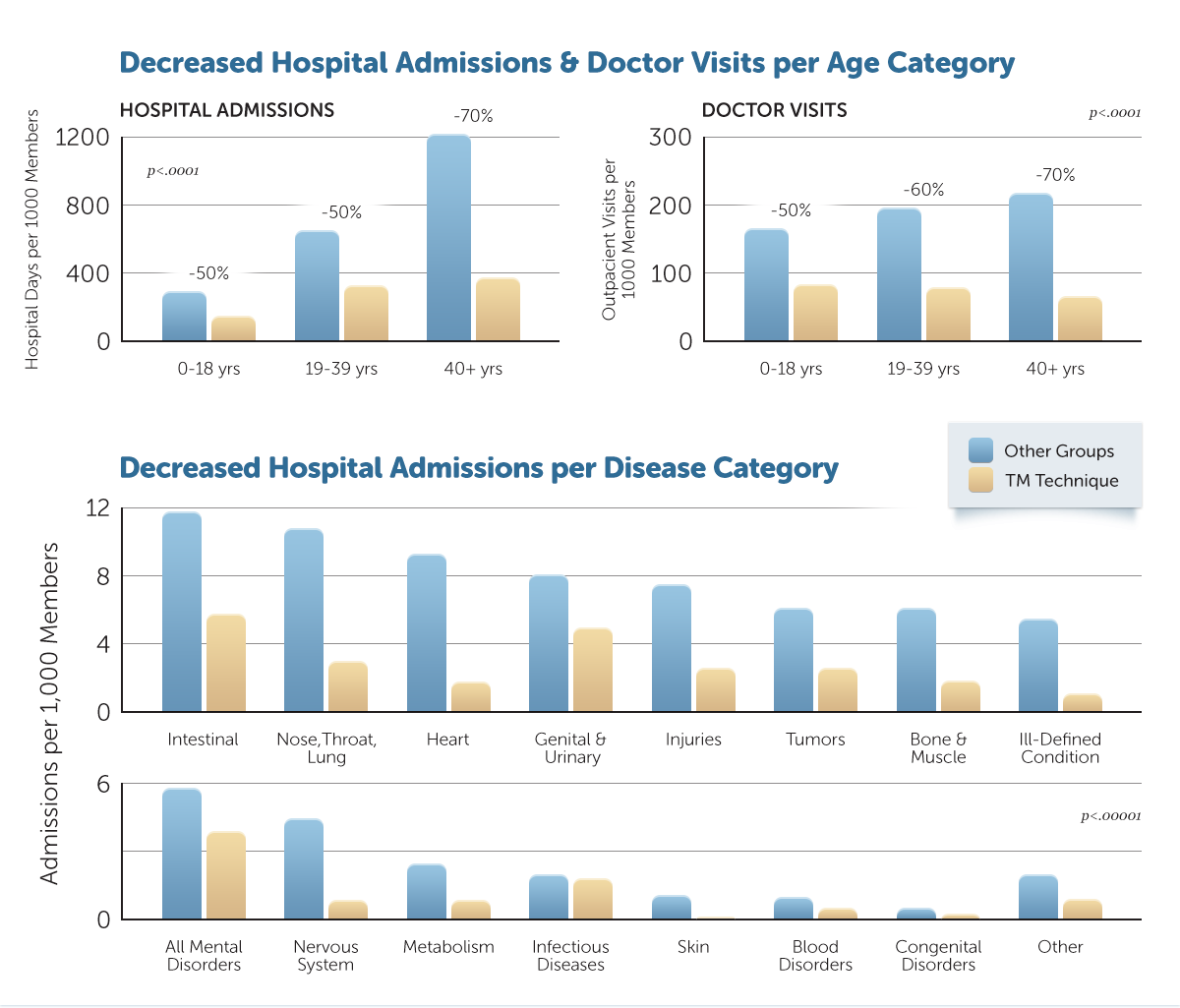 Rest, as we all know, is the best antidote to stress. The deep state of rest during transcending can heal even our deepest stresses (even traumatic stress).

And this has a powerful effect on our health. Accumulated stress disturbs the natural functioning of our nervous system, which is the root-cause of 90% of our health problems. Remove the cause and the symptoms disappear. Teaching people to remove their own stress is essentially teaching them to heal themselves…and healthcare costs go down by 50%.Ref.Psychosomatic Medicine 49: 493–507, 1987 Ref.American Journal of Health Promotion 14: 284–291, 2000

Reduced stress and improved health is only 10% of the story, however. And by focusing  on TM mostly as an effective stress-buster (which it is), most people have missed the far more important effects it can create.

All teachings of almost all ancient traditions seem to agree that the key to success in life, and even to open the door to spiritual experiences, is to simply know (or be) yourself. 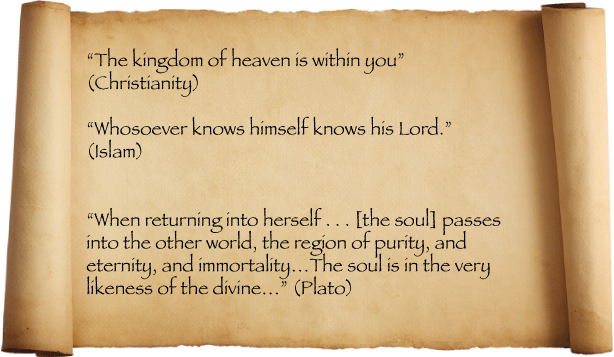 This never made sense until now, and it seemed just like a nice statement rather than an ancient eternal truth. But when we understand that true silence is both the experience of the wave merging with the ocean (in touch with our higher self, which could be called divine) while it is also the only state of truly being yourself, it all starts to make a lot more sense.

Normally our attention is directed outwards, away from “I am”, towards the things we observe, do, or think. We loose ourselves in the world around us.
When the mind comes to a state of true silence, where we don’t observe, do or think anything, the mind comes home. True silence is simply being ourselves.

The reason why the mind will spontaneously transcend is because transcending is a state of coming home for the mind. Just being in that silence is the most enjoyable state there is for the mind and it will go there by itself. This is why we don’t have to force the mind. Quite the opposite, any effort, or any concentration on some object or thought will only keep the mind focused on something outside, and will prevent the mind to transcend.

So it’s very simple: True silence is both truly being yourself and discovering the higher divine consciousness. As such we could say that the path to the divine is just being yourself.

Even if we just look at it from a practical level, independent of any spiritual aspect, there is no doubt that learning to be yourself, together with learning to heal yourself, is  one of the most important things you can ever learn in your life.

Abraham Maslow was famous for studying the most successful people in society, and came to the conclusion that what they all had in common was that they were just themselves. So he created psychological self-actualisation tests to be able to determine to what degree people could be themselves all the time. This includes self-confidence, self-acceptance, being in the now, keeping an inner balance at all times etc. Most truly people who are truly successful (both in their jobs and in their personal lives) just have a high score on all of those.

It will come as no surprise, then, that TM has a strong positive effect on self-actualisation. A meta-analysis of 18 TM self-actualization studies, with more than 500 participants in total, found that the effect of transcending through TM was 3 to 4 times stronger than the effect of any other meditation technique that was ever researched.

The most spectacular study was a long-term study of students of Maharishi University of Management (MUM), a university founded by Maharishi in 1972, which is currently based in Iowa, USA. (“Management” in this case stands for successful management of all aspects of life, not just business). They were measured at the beginning of their university career and again after 10 years. At the end of the study there was a significant increase in self actualisation scores with all the students, and 38% of the students had reached the highest scores on self-actualisation tests (compared to normally 1% of the population). The study also looked at students from 3 top universities as a control group, but found no improvement in self actualization at all (even a slight decrease in 2 out of 3). The chance that the difference between MUM and the 3 control universities could have been a coincidence was one in 500,000. Ref: Journal of Social Behavior and Personality 17: 93–121, 2005 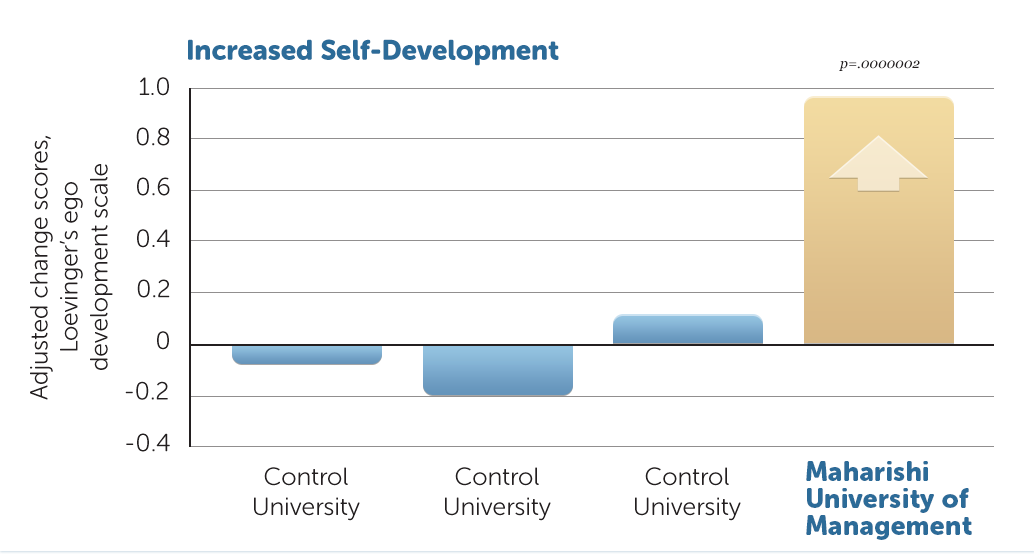 Some of the most spectacular TM studies have been the ones measuring the effect on the brain, by measuring EEG brainwave coherence.

Each time a part of the brain is active there is an electrical activity, which can be visualized in the form of EEG brainwaves.

Next a computer (or these days even a smartphone) can mathematically analyze these waves and calculate to what degree they are similar, or coherent.

When we are in activity, this coherence is generally low (usually around 20%). Every experience will activate a different part of the brain, so during activity different parts are usually involved with different activities (seeing, hearing, moving your muscles etc.), and there is little coordination between them.

When we transcend we have a direct experience of the ocean, that reality where everything is connected to each other. As a direct result all the parts of the brain will become coherent, and the brain will start functioning as one coherent whole. (Ref: Cognitive processing, 11(1): 21-30, 2010) 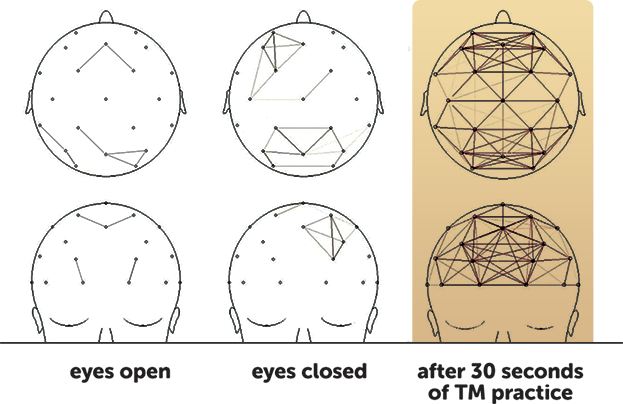 The amazing thing is that this can be measured in real time while somebody is practicing TM. You can see on this video how within seconds after starting TM EEG coherence maximises to 95-100% (3 min).

This experience is unique to TM practice, it doesn’t show (at least not nearly to the same degree) with other meditation practices, because the brain will only show this kind of coherence when it transcends, not with ordinary relaxation. There is no better way to distinguish TM from other techniques than simply measuring what happens in the brain. 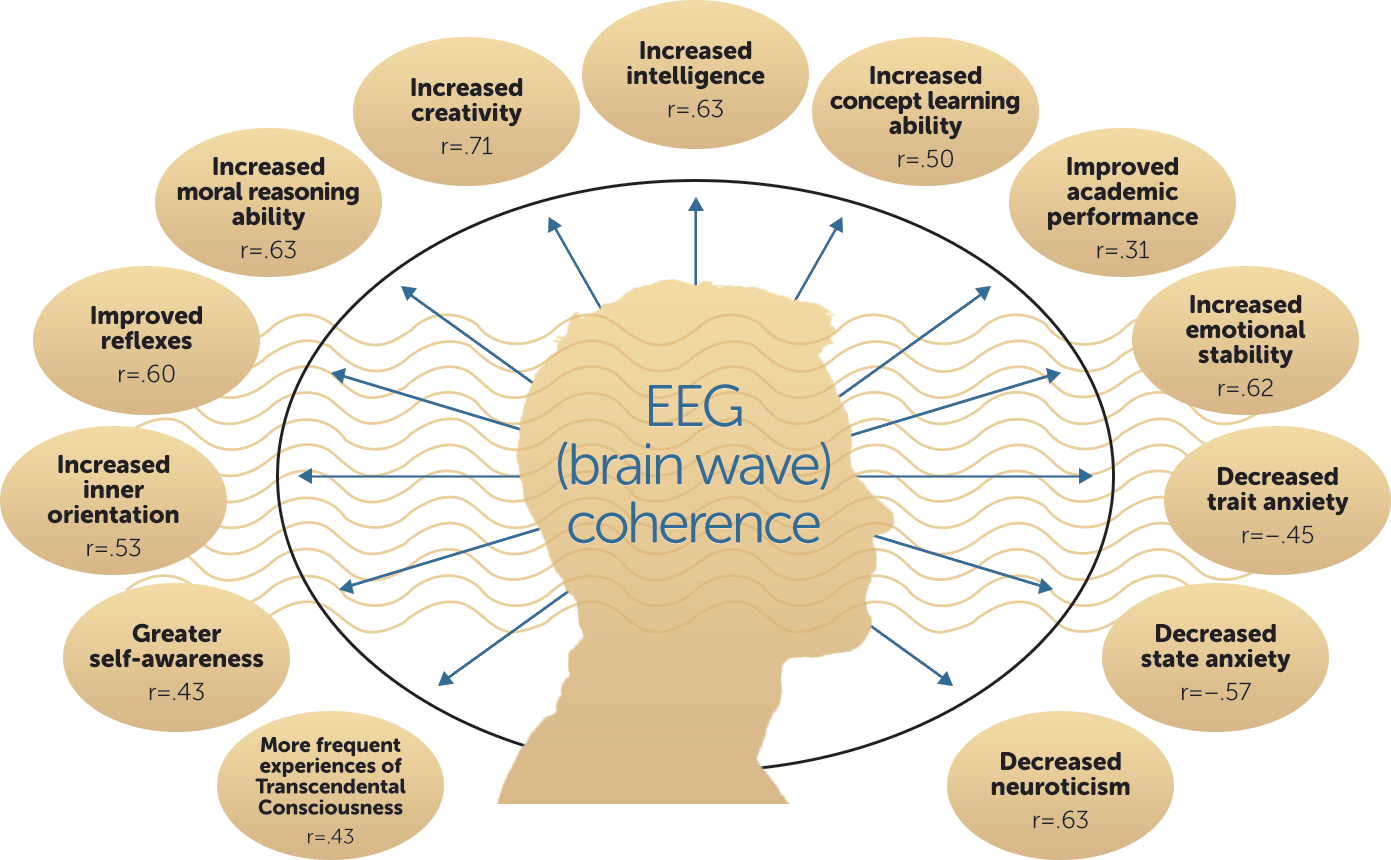 More than 50 published studies have by now confirmed the effects of TM on brain coherence. Again, if this all was a hoax, almost all of the most prestigious scientific journals on brain sciences, including the International journal of neuroscience would have to be involved.

By far the most impressive results of this increased brain coherence, however, come from a small school in Iowa, also founded by the TM organisation. The Maharishi School of the Age of Enlightenment is a school just like any other school, with the exception that all the children practice TM twice a day as part of their school curriculum. 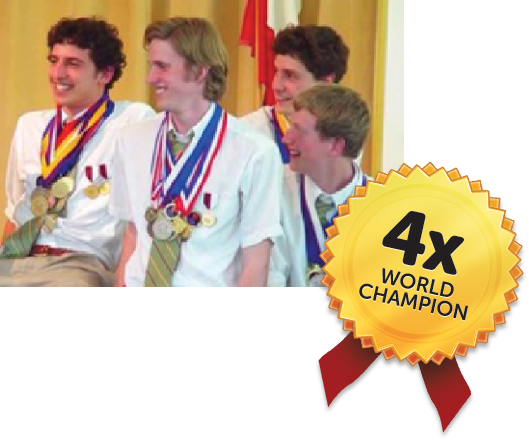 When children arrive at this school, they have an average IQ and creativity, by the time they graduate at age 18, they score in the top 1% of America…and win world championships in creative problem solving competitions. More than 100.000 of the most creative children in the world participate in creative problem solving competitions like Destination imagination every year and yet the children of the Maharishi School have won 4 world championship titles and finished in the top 10 in several more. Needless to say, no other school in the world has come even close. 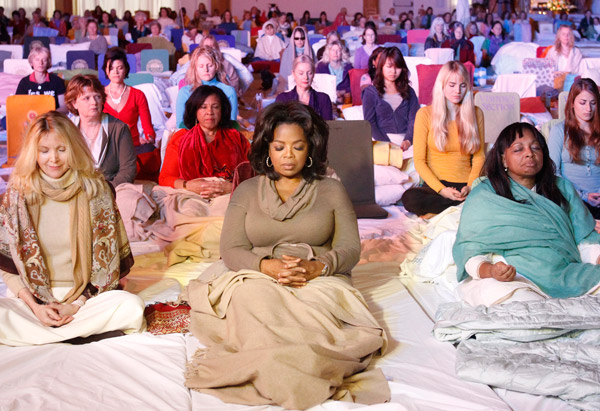 Quite naturally people who have heard about this school are impressed. Oprah Winfrey was so impressed that she did a documentary on the school, and eventually learned TM herself. She was so happy with her practice that she eventually paid for all of her 400 employees to learn. (Here’s a picture of Oprah practicing TM in the meditation hall in Fairfield, Iowa, where both the Maharishi University and the school is based)

In 2005 the New York Times listed the idea of “TM in schools” on top of their annual list of best ideas of the year.

By now it probably won’t surprise you that a lot of the most successful people in the world are practicing – and publicly supporting – the TM technique. Let’s take Ray Dalio as an example, who is the most successful Wall Street Hedgefund manager in the world. He founded and runs a $160 Billion Hedgefund and for the past 5 years has made an average $1.5 Billion per year. That comes down to $750.000 per hour. Yet he never misses his 20 minute TM practice (even if, at his hourly rates, it would cost him $250.000 per session). He’s been a devoted TM practitioner for more than 46 years and has always claimed that TM was, more than anything else, the main secret of his success.